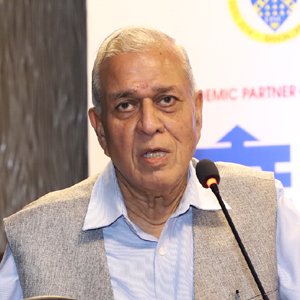 Prof. Aggarwal obtained his Engineering Degree from Punjab University and Masters degree from Kurukshetra University securing First position in both. Later, he did his Ph.D in Reliability Evaluation and Optimization also from Kurukshetra University.  In 1975, he rose to the level of Professor at an age of 27½ years, probably the youngest person in the world to have achieved this level. After a distinguished service of 27 years at NIT, Kurukshetra, Prof. Aggarwal was appointed Pro Vice-Chancellor, Guru Jambheshwar University (Technical University of Haryana), Hisar  for a period of three years, and then in 1998 appointed as Founder Vice Chancellor of GGS Indraprastha University, Delhi.  He continued on this position  upto November, 2008.

He has been President of the Institution of Electronics and Telecommunication Engineers (IETE) for the period 2002-2004.  During this period, this Institution witnessed an unprecedented growth and made a remarkable impact on the society in general & IT professionals in particular. He also served as Sectional President (IT & CS Section) in the Indian Science Congress Association,  President, Computer Society of India for the period 2007-2009 and President of South East Asia Regional Computer Confederation (SEARCC) for the years 2008-10.

Prof. Aggarwal did not confine his contribution to the academic field alone and instead made a very strong impact in the industrial world.  He delivered lectures in several industrial organisations and conducted programmes for many important industrial houses such as Tata Consultancy Services, BHEL, TVS Electronics, DCM Data Systems, Central Mechanical Engineering Research Institute, Electronics Corporation of India, BEL, ISRO, Defence Research Labs.,etc.  He has been widely consulted by the industry, most notable being his contribution towards the Reliability Analysis for PSLV (Polar Satellite Launch Vehicle).  He delivered a talk on Reliable Automotive Electronics in Ford Motors, Detroit, USA and also conducted a full day program for Information Management Resources, Florida, USA.

Prof. Aggarwal has written few books and many of his articles have appeared in several books published by IEEE of USA.  A couple of years ago, he authored a book on Reliability Engineering which is published by Kluwer Academic, Netherland/USA/ UK.  His latest book on Software Engineering published in 2001 has already seen several reprints.

Prof. Aggarwal was honoured by the Reliability Society of IEEE, USA for his services as Guest Editor for the special issue on “State of Reliability Effort of the Indian Sub-Continent”.  He was declared as the Man of Decade, Man of the Century and finally Man of the Millennium by American Bibliographical Institute, USA. He was also awarded Delhi Ratan by the All India Conference of Intellectuals.  International Biographical Centre, England has published his biography in “The First Five Hundred – at the new millennium” in July 2000.  The Broadcast Engineering Society of India honoured him by conferring Honorary Fellowship on him in February, 2001 and the Computer Society of India Conferred the Fellowship on him in 2003. Prof. Aggarwal was conferred Distinguished Fellowship in 2010 and the very First Life Time Achievement Award in 2011 by the Institute of Electronics and Tele-Communication Engineers, India. Computer Society of India also conferred the Life Time Achievement Award on Prof. Aggarwal during 2016.